Posted on September 28, 2014 by ASuburbanLife 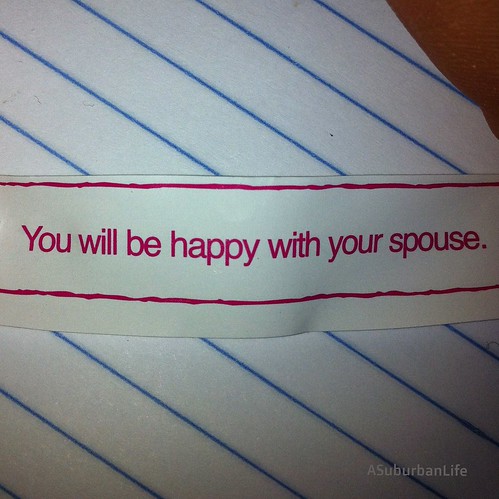 “Don’t think too hard before you answer,” my husband said at 11:30pm as I was about to roll over in bed and turn off the light, “but do you want me to make nachos?” That was how I knew he didn’t like the dinner I’d prepared that night.

A New Year’s resolution…in one word

Posted on January 8, 2014 by ASuburbanLife

With the new year comes the inevitable and universal encouragement to set resolutions. Magazines and blogs are rife with advice on defining and keeping resolutions.

I’m continually in self-betterment mode. There are countless ways I want to be a stronger, healthier, more organized person. I’m easily seduced by exercise programs and cleanse diet plans and lists and lists.

My husband scorns New Year’s resolutions, so every year I enjoy asking him if he plans to make any, just to get the predictable response of derision. When I asked my ten year olds if they planned to make any New Year’s resolutions, they were puzzled.  “What does that mean?”  I explained about setting goals at the start of a new year to become the person you want to be in mind and/or body. “So,” I asked again, “are you making any?” “No!” they replied in unison, looking at me the same way they would, I imagine, if I’d asked if they’d ridden a unicorn to school.

At what age, I wondered, do we transition from complete self-acceptance to wanting to improve in so many ways that we have an entire list of resolutions?

I asked my 18 year old daughter the same question, and she also had no plans to make resolutions. Why should she?  I’ve observed her living the change she wants to be (to rephrase a popular expression). She makes exercise a priority, she eats consciously, she stays focused on her academic goals.

In recent years, I’ve noticed a trend, at least among bloggers, toward identifying a word for the year. The idea is that a single word can encapsulate what you hope most for yourself in the new year. I’ve not paid too much attention to this practice, dismissing it as trendy or something more relevant for people far more creative than me to use as a focal point for their craft.

But this year, while contemplating whether I would make any New Year’s resolutions at all, a single word came to me – LISTEN. I realized that in my multiple personality life of mother, wife, employee, manager, friend, daughter, sister, etc. I do not listen as often as I could. My younger daughters have surrounded their beds with Harry Potter and Percy Jackson books, but I’ve not asked them exactly which one they’re reading and what they think of it. When one of them talks to me I continually interrupt them to dispense instructions to the other – “go brush your teeth”, “finish your milk”. When I ask my oldest daughter about her life she so often says “You already asked me that.” I did? What was the answer?

LISTEN as a practice for 2014 conveys so much. It means stop multi-tasking. Stop making dinner and look my child in the eye when she’s relaying a story about an incident at school. Stop scanning Pinterest while I’m talking with someone on the phone. Do not answer email when I’m on a conference call at work. When I ask someone a question, really listen to the answer.

I think I’m going to like this new approach.  For one thing, by focusing on a single word I really can’t screw up. My old-style resolutions were so black and white. Succeed or fail. Lose 10 pounds or you’re a loser. Exercise 5 days a week or you don’t have the will to make one simple change.

An aspirational word is encouragement; there’s no measurement.  It’s a gentle reminder.  It’s a whisper in the back of my mind before I respond “Tell me about it.” when my child says “We had an assembly at school today.”  I can only get better.

When I was a kid, my parents had several Simon and Garfunkel albums that my sisters and I would listen to endlessly. So many of the songs felt melancholy, and one, in particular, haunted me even though I was only 8 or 9 years old.

“7 O’Clock News/Silent Night” is a beautiful version of the Christmas carol Silent Night, overlaid with a news broadcast from a single day in 1966. As the song progresses, the news begins to overtake the carol, and I remember being horrified hearing that several nurses were stabbed and strangled in their apartment, and that the U.S. would be at war for several more years.

The juxtaposition of the magical beauty of Christmas, to my 8 year old self, with the horrors of the outside world made a deep impression on me.  This might be one of the reasons why, even now, I can’t listen to Silent Night without crying.

Today was the children’s Christmas pageant at our church.  The children had several rehearsals this week – each the noisy jumble any event with two dozen children is. I’ve sat through enough play/pageant/talent show rehearsals to know that as chaotic as even the dress rehearsal can be, it all comes together beautifully for the performance.

The church was abuzz this morning with excitement, not only that of the children, but of their parents, friends, and extended family as we filed in and took our seats.  The minister began the service by announcing that we would have a moment of silent reflection in remembrance of last year’s shooting at Sandy Hook Elementary School, with a ringing of bells, one for each soul that was lost one year ago.

I sat in the pew with my angel Gabriel on my right and my lead shepherd on my left, tears streaming down my face.  Twenty six is a lot of bells.  I cried for the parents who were about to go through a second Christmas without their beloved children. I cried for the family of the beautiful girl in Denver who was shot this week by a classmate and remains in critical condition. And I thought about the birthday party my daughters would be attending in the afternoon.  A laser tag party.

Now, in our family the use of toy guns is non-negotiable.  My husband served for several years as a police officer, and he is adamant that our children never, ever think of guns as toys. Our daughters have never had water pistols.  We don’t allow them to play violent video games. We are less concerned about their watching a movie with suggestions of sexuality than one with gratuitous violence. When we lived in the Pacific Northwest over two decades  ago, one of my husband’s fellow officers almost drew his weapon on a teen boy who had a toy gun.  This year in Northern California, sheriff’s deputies shot and killed a teen with a toy gun.

So when our ten year olds received an invitation to a friend’s laser tag party, I felt very conflicted. I wanted them to be able to help their friend celebrate her special day.  I didn’t want them to miss out on a social activity that all of their other friends were attending.  I didn’t want to imply judgement on other people’s parenting by my disapproval of their party venue. But I felt uncomfortable with the idea of laser tag.  The laser tag facility is very clever in their marketing, describing the activity as “combining the classic games of hide-and-seek and tag with a high tech twist.”  But the reality is that my girls would be running around “armed” with some sort of device by which they would “shoot” their friends. I sought the advice of my sister and of my oldest daughter who said, “mom, you’re over-thinking it.” My husband, too, was surprisingly ambivalent.

This parenting business is challenging. And we certainly don’t claim to be perfect at it. It was so easy when they were little. As they get older, we just do the best we can, knowing we’re making mistakes along the way.  Sometimes the answer is crystal clear, and other times it is not. As we told our oldest daughter when she was in middle school and introducing us to all kinds of new parenting decisions, “sometimes we’ll say yes when we should have said no, and sometimes we’ll say no when we should have said yes, we’re just trying to figure this out as we go along.”  The younger kids are at a laser tag birthday party today, and I still don’t know if we said yes when we should have said no.